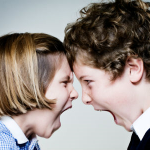 For many families, siblings fighting can be a common occurrence. The phrase “kids will be kids” is often spoken by parents who just believe their kids are just acting the way most kids do. However, could this behavior between siblings be harmful? Neil Tippett and Dieter Wolke set out to investigate this idea in their research study on aggression between siblings and its associations with the home environment and peer bullying.

To conduct this experiment, published in Aggressive Behavior, they used the longitudinal panel survey conducted annually in the United Kingdom. This survey is conducted over a few years and asks one member of the household to complete an interview. Along with this, children between 10 and 15 years-old in these households are asked to complete a questionnaire. The sample included more than 4,000 participants between the ages of 10-15 years-old. They asked questions about siblings fighting with a scale of never too few times every week to rate four different types of fighting which included: physical aggression, stealing, verbal abuse, and teasing. For school bullying they asked six different questions; two questions about if the youth were bullied by their peers, two were modified from the Peer and Friendship Interview and measured physical bullying, and lastly relational bulling. The most prevalent types of fighting where physical, verbal, and teasing.

One of the main findings from this study was that siblings fighting is very common. They found that one third of the children were regularly involved in fighting with one’s sibling. Another finding shows a moderate to strong association between sibling’s fighting and peer bullying. Given some evidence that victimization by siblings was linked to being bullied and for child who did the aggression were more often to bully others at school.

Parenting characteristics were found to have a strong link with siblings fighting. In households with poor relationships and harsh parenting predicted more fighting between siblings. However, the results of the study showed that in houses with positive parenting and good relationships with their children can reduce levels of fighting. These children are also found to be better adjusted at school.

By Annie Jones
Annie is a junior, majoring in Psychology and minoring in Human Development, Human Biology, and German. After graduating from UWGB, she plans on attending the University of Wisconsin-Madison for their Genetic Counseling Master’s program.