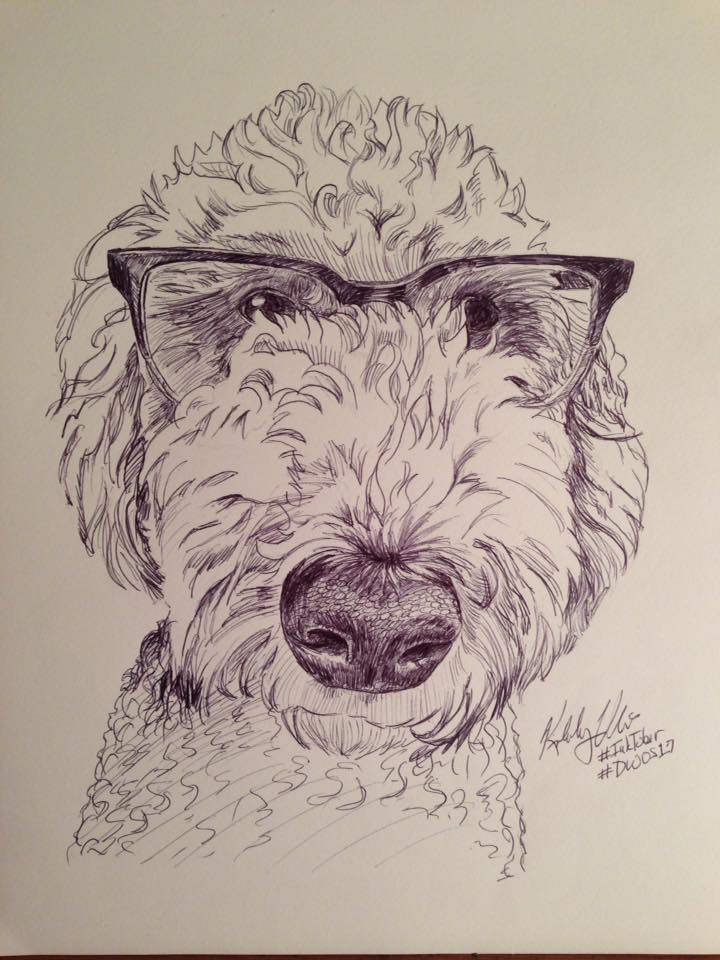 I’m a contestant in the Dancing with Our Stars fundraiser for the Northeast Wisconsin Chapter of the American Red Cross.  As part of that, I am working to raise as much money as I can and have put together and incredible fundraising team of people from across the University of Wisconsin-Green Bay.  In late September, one member of my team, Kimberly Vlies, sent me a Facebook message that read,

I could draw ball point pen portraits of people for #Inktober. Proceeds to the team?

I, of course, had no idea what this meant.  I had no idea what #Inktober was and only sort of knew what she meant by ball point pen portraits.  What I knew was that (a) Kimberly is incredibly talented and (b) Kimberly has lots of great ideas.  So if she thought it would work, I was on board.

I did, however, go look up #Inktober.  And you know what?  It’s pretty great (learn more here: http://inktober.com/). Every October, artists from all over the world take the challenge by doing one ink drawing a day for 31 days.  It has spurred beautiful work, much of which can be seen on Twitter or Facebook, including this incredible series (near and dear to my heart as a psychologist) from Shawn Coss illustrating different forms of mental illness.

Kimberly’s idea was to draw ball point pen portraits by request for $15 each (or more when there were multiple people or it was otherwise more complicated).  She would draw either from photos that people submitted to her or from a live model when people were able to actually sit for the portrait.  She would do one a day, post the pictures to the Facebook page for the fundraiser, and the requester would get to keep the portrait.  Both Kimberly and I suspected that this fundraiser would be successful, but neither of us anticipated just how successful (more on that in a bit).

First, here’s a little bit about Kimberly.  She’s a graphic designer in the Marketing and Communication Office at the University of Wisconsin-Green Bay.  She has two degrees, Graphic Communications and Spanish, from the University of Wisconsin-Oshkosh, but she has been interested in art since she was in the 4th grade and learned that her artistic skills were several years ahead of her age.  She first learned about #Inktober through a friend, Ivan San Martin, a fellow artist she had met years earlier when she studied in Spain.  He posted his own #Inktober art on Facebook and she was inspired.

I was interested in giving it a try myself, but knew that coming up with a subject for daily practice would be difficult.  Years ago I got the idea to draw portraits as a part of a social media campaign from a guy who would snap photos of people he met at conferences, draw them and post their drawings to social media. People got a huge kick out of being tagged in their drawings and it generated social engagement.

The initial launch of our #Inktober fundraiser was really fun.  There happened to be a Red Cross Blood Drive on campus the day we wanted to kick things off so we launched the campaign with her first drawing from there.

And here she is actually drawing me.

I can tell you as a non-artist who appreciates art, this was really interesting.  She talked me through her process, explained the challenges, and told me how she became interested in art.  For example:

Drawing from life is more challenging because there is an additional step of translating 3-D information to 2-D. If my model moves, I move or I look out one eye or the other, the whole reference point changes and I have to do my best to recalibrate. There is an immediacy to it that forces me to capture the energy of gesture lines, rather than train my tunnel vision on exact details.

And from that, the #Inktober campaign took off.  The 31 slots filled up in no time.  People wanted portraits of their kids, grandkids, nieces, nephews, and pets.  They requested them as gifts for their partners and parents.  Each day when we posted a portrait on the Facebook page, it got liked, shared, and received a host of positive comments.  Here are just a few of those wonderful portraits (including the ones she did of my kids; check here for the rest):

We had hoped to raise $500, but because so many people donated a little extra when they paid for their portraits, we ended up raising far more than that.  I asked Kimberly if she expected this sort of response:

I did not expect the response to be this overwhelmingly positive. I was better than 50% sure it would work. I figured we could find 31 people who would buy a drawing. I set the price low just in case it would be hard to find takers, and I wanted it to be accessible/affordable for anyone.

What was most surprising to me, though, wasn’t the success of the fundraiser.  It was her response when I asked her what was most challenging about the fundraiser.  I expected her to say the hardest part was finding the time to draw.  Instead, though, she pointed to the self-doubt doubt she feels when she sits down to draw.

Each time I pick up the pen, I am confronted with self-doubt. It doesn’t matter that I have a B.F.A. or that I’ve been drawing my entire life, I’m so afraid that I can’t do it. I have to convince myself that whatever I do will be ok and just proceed with the drawing. As I work on each drawing, I vacillate wildly between thinking I’m doing ok and thinking I’ve ruined the drawing beyond repair. When each drawing is done, I’m surprised with how well it turned out and it feels like somebody else did it.

I didn’t expect someone so talented to talk about self-doubt.  I also know, though, as a psychologist and emotion researcher that people find inspiration and motivation in a variety of ways.  For many, some anxiety is part of the creative process.

The money she raised will go to a great cause, one that is near and dear to her heart.  Kimberly is not only a great artist and wonderful friend, she’s a dedicated blood donor.

The American Red Cross has a special place in my heart because I have blood type O-, which means I’m the universal donor.  This means that in life-or-death situations, when there’s no time to evaluate blood type, they can grab a bag of my blood and know it won’t contain conflicting antigens.  Type O- blood makes up 7% of the population and I’m really proud that I can help save lives. The Red Cross is known for their blood drives, but they also do very important humanitarian work, like responding to disasters world-wide, vaccinating children in 3rd world countries, helping individual families in military deployment or devastated by fire. The Red Cross also offers excellent training and certification programs for first aid, CPR, and AED, babysitting and child care, lifeguarding and CNA work.