1. It’s Been Around Since the

2. The Goal is to Educate the Public on How to Prevent Sexual Assault: Organizers wanted to create a time of awareness for sexual assault and educate the public on ways to prevent sexual assault from happening. Organizers hoped to encourage individuals to work together to help sexual assault survivors and end rape culture.

4. The Intended Audience is… Everyone: Resources and events are intended for the public. This includes parents, educators, coaches, spiritual leaders, and students of all ages. These events and activities are geared towards specific groups such as college students who are part of a Greek Life.

5. You Can Help With the SAAM Action Kit: Every year, activists and the public create posters, clothing, postcards, and coloring pages to inform people about SAAM. Furthermore, organizers designed an action kit that contains several useful resources. The action kit contains several pages of information about SAAM, how to bring awareness to the public, and numerous posters that individuals are able to print off and hang up around their communities. All resources are presented in different languages, including Spanish and English. Social media sites are another great place that SAAM organizers want the public to utilize. On Instagram, people can include #30DaysofSAAM in their posts. Additionally, people can promote SAAM during the month of April using #SAAM in their Twitter and Facebook posts. 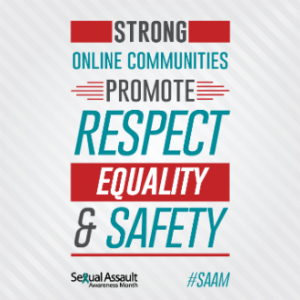