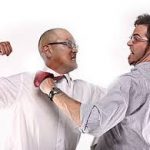 Extreme beliefs in maintaining traditional gender roles may come down to something called the “Precarious Manhood Theory” (Vandello & Bosson, 2013). That is, when men do not feel masculine, they are more likely to engage in gender stereotypical behaviors, such as aggression, taking risks with money, and avoiding things like housework and childcare. One question that remains, though, is does the precarious manhood theory hold up in cultures where there are few, if any, differences between male and female roles? Kosakowska-Berezecka and colleagues (2016) sought to answer this with a study in Poland where there are fewer differences in male and female gender roles.

Results from this study suggest that male individuals who are informed of having low testosterone felt that they were not “manly” enough, and were more likely to engage in gender stereotypical behaviors, such as getting involved in physical fights. On the other hand, males who were told they had high testosterone levels were more likely to agree with equality between females and males and were more likely to partake in perceived “feminine” responsibilities such as caretaking or doing housework. Last, males who identified with an egalitarian culture were less likely to report masculinity threats and did not feel the need to display certain masculine behaviors in order to prove their “manliness” to others.