Anger suppression, when we feel angry but don’t express it, has long been associated 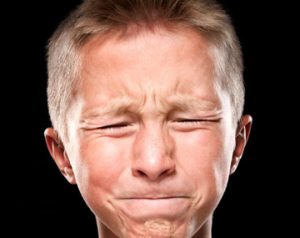 with a variety of psychological and physical health problems.  Recent research, though, shows that it also might be associated with aggression and violence. A 2015 study in Psychology of Violence looked at 64 criminal offenders who were asked to complete measures related to anger, other emotions, verbal attention, and past aggression.  The findings showed “that participants reporting difficulty attending to their emotions had more extensive histories of aggression than those who did not report such difficulties” (Robertson, Daffern, & Bucks, 2015, p 74).  In other words, those participants who suppressed their anger rather than finding some healthy outlet were more likely to be aggressive or violent.

According to the authors, a failure to attend to emotions (what they call “overregulation”) leads to violence in several ways including an increase in general negative affect, encouraging a more superficial thought process, decreasing the quality of interpersonal relationships, preventing resolution of any problems, and leading to an increase in physiological arousal.

What then is the solution?  The authors suggest that an important way to control aggressive behavior while angry is to attend to the anger rather than attempting to avoid it.