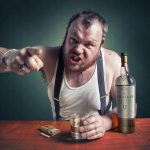 In today’s world, underage drinking and violence are significant topics of interest, and there have been multiple studies that have found a link between heavy drinking, anger, and immediate violent behavior following the consumption of alcohol.  In order to evaluate just how much of an impact consuming alcohol during early adolescence has on later adolescence anger, Dr. Michelle Weiner and her colleagues conducted a study to investigate this relationship (Weiner, Pentz, Turner, & Dwyer, 2001).

Results of this study indicate overall that early adolescence alcohol consumption ultimately increases anger in later adolescence, controlling for gender, age, and socioeconomic status (Weiner et. al, 2001). Alcohol use in the past 30 days among 6th and 7th graders increased the odds of them saying or doing nasty things, being a self-reported hothead, and having a high anger score on the anger scale in grades 10 and 11. As the students grew older, their reports of anger and aggressive behavior only increased. For example, the students that had reported either consumption of alcohol or drunkenness in the past 30 days in grades 6 and 7, were associated with higher anger scores on the anger scale, as well as doing bad things to cause trouble in grades 9 through 12.