People think of anger as an emotion athletes often feel and even “use” during competition as a way to get pumped up, increase aggressive play, and even outperform others with the “angry edge”. Well, why not ask athletes themselves how they view anger the day of, immediately before, and during competition? Is experiencing anger seen as beneficial? Are sports an “outlet” for releasing anger in an acceptable way? 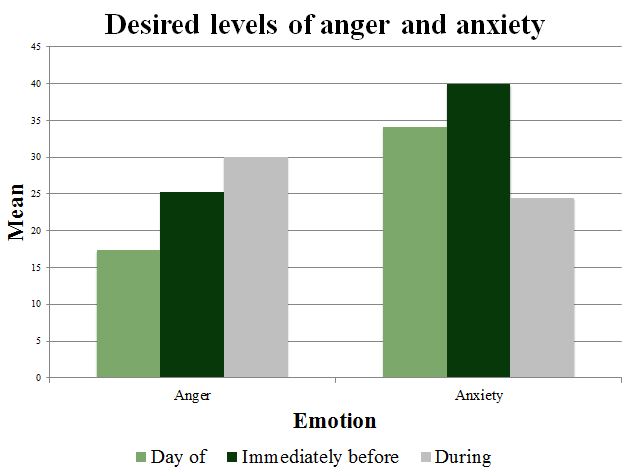 Students who competed in a varsity level sport in high school and some current college athletes participating in an online survey say that YES anger may be beneficial. Athletes actually desire to experience increased levels of anger as competition nears and hope to feel at their angriest during competition. On the other hand, athletes view anxiety as harmful to performance and strive to experience less of it as competition nears. Could it be that athletes actually strive to enter into a competitive scenario feeling angry?

Part of a bigger study looking at emotional intelligence in sports, the findings regarding anger were striking. As mentioned above, athletes want to feel angry, but the opposite seems to be true of anxiety. Athletes were asked to share personal examples in which anger helped and interfered with performance.  Athletes reported anger as a distraction as the biggest reason for it interfering with one’s performance. For example, say an athlete was angered by foul play from the opposing team, a poor call made by the ref, or a careless mistake he/she made a few moments earlier…this was oftentimes seen as interfering with performance. On the other hand, athletes associated increase in adrenaline as a positive component of anger. Athletes 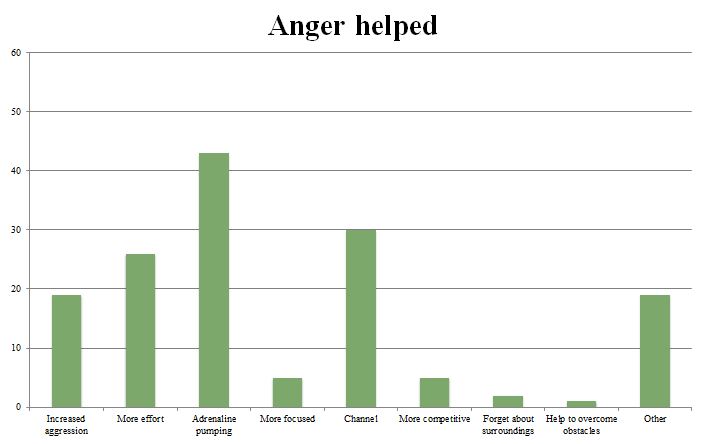 that felt angry indicated that their adrenaline was pumping, they felt more motivated and excited leading to increased levels of performance. Interestingly, athletes were also asked to participate in a questionnaire looking specifically at emotional intelligence.  Participants who scored higher on emotional intelligence considered themselves to be more successful in their sport when comparing their abilities to others they compete against. This suggests that athletes view emotions, or more importantly their understanding and ability to manage such emotions, as playing a role in sports performance.

What does this research suggest for athletes and their emotional experiences during sports competition? Athletes view anger as a beneficial emotion surrounding sports. This may suggest that athletes should incorporate feelings of anger into their sport routine and competition prep. Findings also suggest that athletes need to learn how to recognize, manage, and understand their emotions in order to reap the benefits of experiencing them surrounding a competition. Future research could look at sport type and see whether athletes involved in sports that are considered more aggressive in nature (e.g., football) view emotions such as anger as more beneficial to performance outcomes. Being able to recognize such emotions could lead athletes to better be able to use such emotional experiences, in turn, leading to increases in ability and performance in a sports context.

By Kayla Hucke
Kayla is a senior majoring in Psychology and minoring in Human Development at the University of Wisconsin-Green Bay. She will graduate with honors in May 2015 and plans to take some time off of school to gain experience before attending graduate school. She will present her honors project, Emotions in Sports Performance, at the Midwestern Psychological Association Conference in Chicago in April 2015.