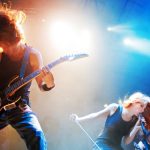 Most of us are familiar with the claim that listening to extreme metal music makes listeners angrier and potentially more aggressive, but how much credibility does this claim actually have?  This idea is exactly what Leah Sharman and Dr. Genevieve Dingle aimed to investigate in their recent study on extreme metal music and anger processing.  Surprisingly, their research found evidence suggesting that extreme metal music may in fact have the exact opposite effect on listeners.