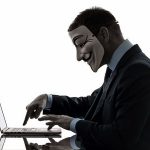 In today’s age of advancing technology and countless social media sites, it’s easier than ever to anonymously comment on posts, pictures and videos.  If you’re like me, you’ve seen some very heated conversations in the comments section of Facebook posts. So, what’s the deal here, are people more aggressive when they know they’re virtually anonymous?  This is the question Adam Zimmerman and Gabriel Ybarra (2016) researched in their Journal Article, “Online Aggression: The Influences of Anonymity and Social Modeling.”

Using 124 undergraduate students from the University of North Florida, the researchers had each of the participants do a word-unscrambling task with 2 other people. If they collectively unscrambled half of the words correctly, they each received a prize; at least this is what they were told.  However, unbeknown to the participants, the game was rigged and they were not actually playing along with others, ensuring that the participants always lost.  This was done in order to simulate an online frustrating social situation in which they felt let down by their “partners.” Participants were then able to write on a blog about their experience.  Half of the participants wrote their blogs anonymously and the other half did not. For both these groups, participants were also exposed to either a neutral blog post, or an aggressive blog post.

As you may have guessed, participants who remained anonymous indicated a higher temptation to purposefully aggress toward their alleged partners and they also used more aggressive words in their blog posts about their experience.  Participants, who were exposed to an aggressive blog post prior to writing their own, were also more aggressive, but only in the anonymous condition.